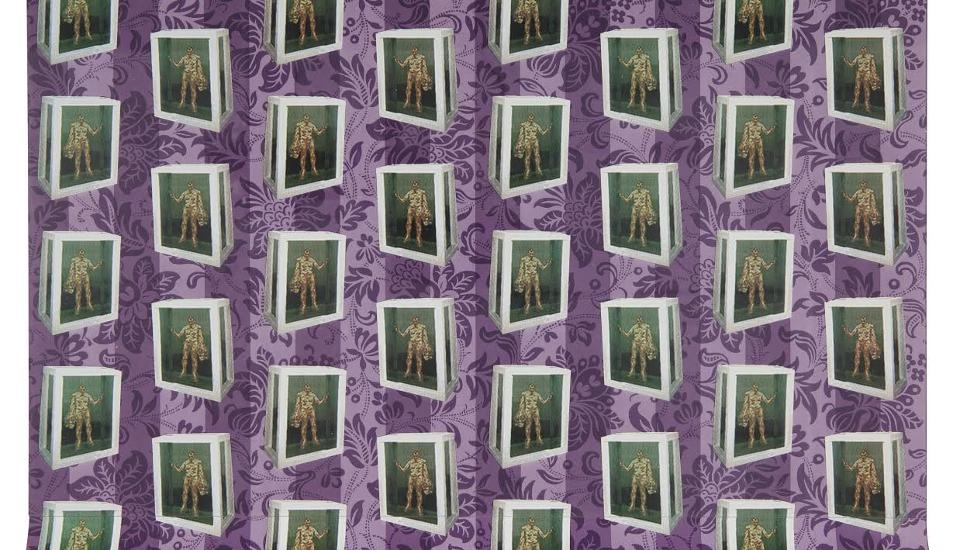 You can now own wallpaper designed by David Bowie

As a man of many talents, the late David Bowie collaborated in 1995 with British textile design company Laura Ashley to create a series of wallpapers inspired by modern psychology and mythical figures. Two rolls of these wallpapers are currently on offer for online bidding until Tuesday, April 28 as part of Sotheby’s New York Prints and Multiples sale.

Among them are “Conflict,” which the music icon specifically designed for his debut exhibition, “New Afro/Pagan and Work: 1975-1995,” held in 1995 at The Saatchi Gallery in London. This design juxtaposes a floral pattern ubiquitous of the Laura Ashley aesthetic with nude self-portraits of Lucian Freud (“Painter Working, Reflection,” 1993) submerged in Damien Hirst-like formaldehyde tanks.

The second roll of wallpaper, entitled “Minotaur,” also features repeated images against a backdrop of traditional English chintz. Its design reinterprets one of Pablo Picasso‘s favourite motifs, the Minotaur, against a large concrete block.

According to The Art Newspaper, “Minotaur” caused controversy at Laura Ashley as the genitals of the mythological creature were visible in Bowie’s original design. “It’s been a good working relationship, apart from the castration, that is. They erased the Minotaur’s genitals,” the British artist once said of his collaboration with the British textile company.

Also hitting the auction block during Sotheby’s Prints and Multiples sale are a selection of Modern and Contemporary prints spanning the 20th century, including works by Pablo Picasso, Joan Miró, Jasper Johns and Andy Warhol.

🎯 Jasper Johns's ‘Target’ belongs to a set of motifs including the American flag, numbers, and the alphabet which the artist began exploring in the mid-1950s to move beyond Abstract Expressionism and reintroduce subject matter into his work. This screenprint from 1974 is a highlight in our Prints & Multiples online auction, featuring a broad selection of Modern and Contemporary prints spanning the 20th century. Head to our link in bio to view the 100+ works on offer, open for bidding through 28 April. #SothebysPrints #JasperJohns

Collectors will have the opportunity to bid for seminal Pop images like Roy Lichtenstein’s “Sweet Dreams Baby” and Andy Warhol’s “Moonwalk”. Additionally, Abstract Expressionist prints such as Robert Motherwell’s “Burning Elegy” and Helen Frankenthaler’s “Tales of Genji II” will be offered.

You Can Now Design Your Dream Luxury Car with Rolls-Royce